Declining reimbursement is one of the greatest financial challenges physicians face today. While there isn't much you can do to stop reimbursement cuts, you can be proactive in learning about the Merit Based Incentive Payment System and how it will impact physician reimbursement.

Fee-for-Service vs. Value Based Reimbursement

Currently, physicians are being reimbursed on a fee-for-service basis. This means physicians are paid for every office visit, test, or procedure they perform. In order to cover overhead, salary, and keep their doors open, physicians are influenced to see as many patients as possible and choose tests or procedures that have the highest reimbursements rates, even if there is a treatment that is just as effective at a lower cost.

The controversy is that physicians are not spending enough quality time with patients, and may not be utilizing resources as effectively as possible. In order to combat this issue the U.S. Department of Health and Human Services is proposing that 90% of Medicare payments be tied to quality by 2018.

This effort to increase value-based payment is accelerated by the Merit-Based Incentive Payment System (MIPS), which drastically affects how a physician is reimbursed.

The Merit-based Incentive Payment System is CMS’s new attempt to control Medicare Spending. This program consolidates three existing programs and one new program, in order to derive a MIPS score, from 0 to 100, which can significantly impact aclinician’s Medicare reimbursements for each payment year. The categories of the newly consolidated program and their respective percentages that contribute to each clinician’s final MIPS score for the 2017 reporting year are as follows:

Who is Eligible for MIPS?

For the first two years (2017 and 2018) of MIPS, CMS has deemed the following Medicare Part B clinicians as MIPS-Eligible Clinicians (ECs):

For the third and subsequent years (2019+), the following Medicare Part B clinicians also become MIPS-Eligible:

As you can see the list of eligible professionals starts out with the highest level clinicians but quickly expands to cover a large majority of clinicians.

Who is exempt from MIPS?

Clinicians who meet certain conditions may be excluded from MIPS. First, if a clinician can sufficiently participate in an Advanced APM (alternative payment model) they will be exempt from MIPS. Next, CMS has set a low-volume threshold, which is set at or below $30,000 in allowed Medicare Part B charges in one year OR at or below 100 Medicare Part B patients in one year. If the clinician meets either parts of this threshold they will be exempt from MIPS.  Finally, clinicians who enroll in Medicare for the first time during a performance year are exempt from MIPS until the following year.

How Your MIPS Score Impacts Reimbursement

The first payment year is set to be 2019, and because MIPS follows the same 2-year lag of similar programs, 2017 is set to be the first performance year of MIPS.

MIPS combines four programs, three of which currently exist. For the 2016 performance year (and the respective 2018 payment year), these three programs (MU, VBM, and PQRS) will continue as separate and distinct measurement and payment adjustments until the 2017 performance year, at which time they will be consolidated with the fourth and new program (clinical practice improvement activities) to generate a clinician’s MIPS score.

The MIPS score will have a maximum impact of +/-4% on reimbursement for the 2019 payment year and this maximum impact will increase to +/-9% for the 2022 and subsequent payment years. Below is a table showing the year-to-year increases for maximum penalties and incentives and how the percentages are calculated in between. 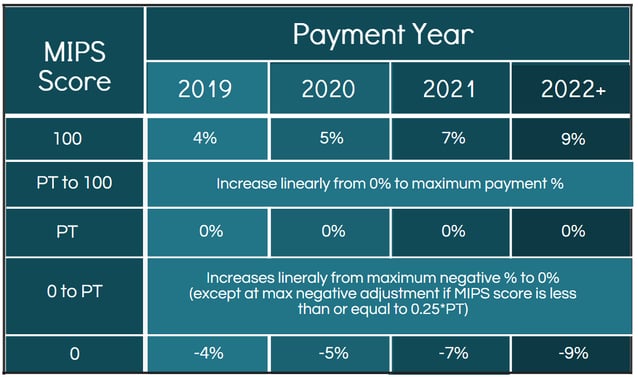 The maximum positive adjustments shown may not be the highest adjustment clinicians could see. The maximum payment adjustment is multiplied by a scaling factor (up to 3) so that the total of all positive and negative adjustments across all MIPS eligible clinicians, results in either neutral or reducing impacts on Medicare budgetary spending. Thus, controlling or reducing Medicare spending on physician services. This is known as the budget-neutrality factor. This will only come into effect if there are a greater percentage of clinicians who receive negative penalties when compared to the percentage of clinicians receiving positive incentives.

What is the MIPS Performance Threshold?

The performance threshold (PT) is the demarcation MIPS score between positive or negative adjustments and is determined every year (besides the first reporting year of 2017) as the mean or median of the MIPS scores for all EPs in a prior period as selected by CMS.

The PT for the first year has been set to 3 MIPS points in order to ease clinicians into the program and make it easier for clinicians to avoid negative adjustments in the first payment year. However, as stated earlier, the PT will increase to the mean or median of all clinician’s MIPS scores. So the PT should drastically increase for the 2018 reporting year.

There are two additional features to note of the MIPS score and payment policies. First, CMS will define an “exceptional performance” bonus in the form of an additional payment adjustment of up to 10% for eligible clinicians who are above the 25th percentile of positive MIPS scores.

This is a significant incentive advantage for each performance year, and as such, should increase clinicians’ motivation to preform highly on MIPS year after year. The Exceptional Performance bonus for the 2017 reporting year has been set to 70 MIPS points.

Secondly, CMS is authorized to “take into account” year-over-year improvement of MIPS eligible clinicians in order to calculate the scores for the Quality and Cost categories (keep in mind Cost does not affect a clinician’s 2017 MIPS score. However, it will increase from 0% to 30% in future years). Meaning low-performing MIPS eligible professionals may still receive credit from improving their scores even if the new scores are still in the lower tiers. This policy should encourage low performing clinicians to continue to improve.

The only way a clinician won’t see a positive or negative adjustment is if they score exactly the PT for that year. This is very unlikely because the PT is only a single number between 0 and 100, and not a zone of scores.

Will you lose patients because of MIPS?

Each clinician has worked years to create a brand that they embody and market to the public. But many physicians might wonder how much their brand actually impacts the level of patients they see or the level of referrals they receive from current patients.

With MIPS these clinicians will wonder no more. MIPS scores are going to be publicly reported on the CMS Physician Compare consumer website. This, along with the rise of consumerism in healthcare, means that patients will likely make decisions based on a clinician’s MIPS score. Furthermore, clinician contracts will likely incorporate MIPS scores because new clinicians joining practices will bring along their MIPS scores and thus, their incentives and penalties as well.